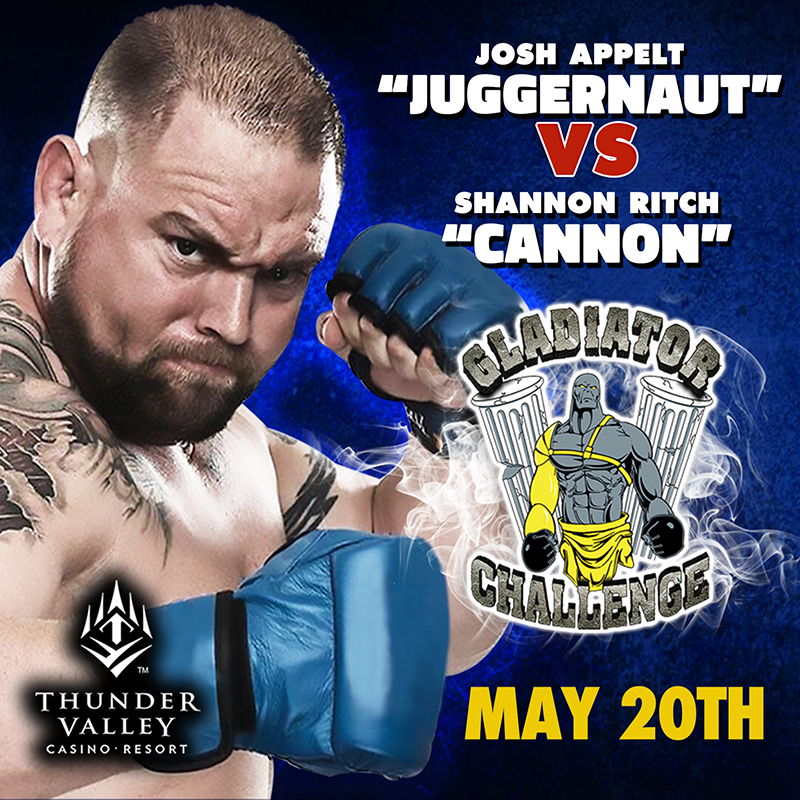 Shannon “The Cannon” Ritch is a Brazilian Jiu-Jitsu Black Belt and is the head instructor at Cannon Jiu-Jitsu, in Glendale Arizona. Shannon’s current MMA record is 112-88-2 and he is known as one of the world most CURRENT & ACCTIVE MMA fighters. During Mr. Cannon’s long MMA career he has faced off with the some of the best of the best fighters in MMA like Kazushi Sakuraba, Frank Shamrock, and Dan Severn just to name a few of them on the biggest MMA platforms such as the UFC and Pride.

Josh “The Juggernaut” Appelt, is also known as the “King of the Streets” in Sacramento, California, has a Mixed Martial Arts Record of 13 – 6 , and is the reigning Gladiator Challenge Heavy Weight Champion! On his way back to the Bellator Fighting Championships, Josh looks to Knock-out the Cannon with the good old 1,2 KO punch! Coming off his TKO victory over heavy hitting 6-1 HWT Ben Beebe in just 1:09 in the first round earlier this year Josh will be defending his Heavy Weight Gladiator Challenge Title Belt at the Five Star Thunder Valley Casino Resort. Doors open at 6 pm with the first bout starting at 7 pm.
Don’t miss you chance to see history made!

To get your event tickets, please logo onto; www.thundervalleyresort.com